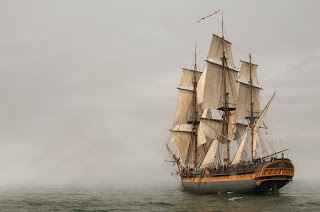 Arghh maties! Grab a pewter mug of ale, pull up a barrel and have a seat while we chat with author Matt Tomerlin. Pirates and seaman alike are welcome and thank you for stopping in to chat with us. He's got a series that will interest you, we're sure! Gather 'round and let's get started. 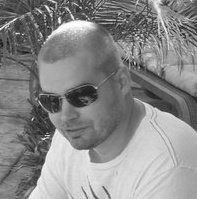 Reader’s Haven:  Matt, thank you for being here with us. Deanna is a big pirate fan so look out, she might stow away here someplace! Tell us a bit about yourself.
Matt:  I'm a thirty-three year old kid with no intention of growing up any time soon, trying to make a living off telling stories. I live in Southern California, where everything I could want is within an hour's drive. I'm a massive movie-buff, with too many useless movie facts taking up space in my noggin.
Reader’s Haven:  What made you want to become a writer?
Matt: Since as far back as I can remember I've been crafting stories in my head. I wrote quite a few screenplays as a teenager, but it wasn't until my early-twenties that I realized I should write a novel. Writing is not immediately profitable, so it's a hard thing to sit down and do for any length of time while you're trying to make a living full-time. Once I became a work-at-home graphic designer, I found much more time to write.
Reader’s Haven:  How true that is but for us writers, it’s what we do and we find a way to make it work. Please share a bit about your new release, "The Devil's Fire," without giving away any spoilers. 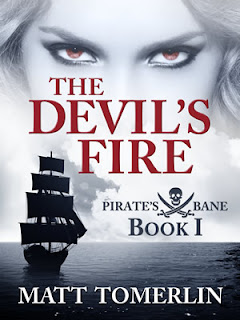 Matt:  "The Devil's Fire" starts simply enough, with a timid woman from London, Katherine Lindsay, being kidnapped by pirates. Her husband is murdered by a covetous pirate captain, and the first third of the novel details the torments she must endure to survive. This is not a romance novel, but a dark exploration of a woman struggling to balance survival and guilt, which are mutually exclusive in this case. The narrative is told from multiple perspectives, shifting through several major pirate characters, but their stories and fates are tied to Katherine Lindsay's introduction into their lives. I had just read George R.R. Martin's "A Game of Thrones," and I liked the idea of perspective chapters. I also wanted to write an adult pirate story that was as realistic as possible, forgoing supernatural elements. "The Devil's Fire" is very violent and probably not for everyone.
Reader’s Haven:  Do you write under a pen name?
Matt: "Tomerlin" is not my real last name, but that name is in my family history.
Reader’s Haven:  How clever! What types of hero or heroine do you like best?
Matt:  I prefer average people who are thrust into fantastic, dangerous scenarios and are forced to find their inner strength. I'm not impressed with musclemen or amazon women, because I'm never really worried for their safety.
Reader’s Haven:  That’s a different take on characterization; we like that! Tell us about a typical day in your life as a writer.
Matt:  I have no routine. One day I might wake up and write two chapters very quickly, and then I'll spend two or three days deliberating. Sometimes I need more than a week and then multiple chapters spill out of me in one day. It can be a mystifying process, but there's nothing more gratifying than finishing a chapter. I try to treat every chapter as a mini-story, so that each might work on its own while moving the overall story forward.
Reader’s Haven:  Do your books have a common theme or are they all different?
Matt: They're all different, but I do tend to focus on a hero/heroine who starts as a blank slate, not really knowing who they are, and discovers their place in the world when they are forced to survive. I love epic character arcs, such as Al Pacino in "The Godfather." It isn't until the very last scene of that film that you realize what Michael has become.
Reader’s Haven:  How long does it take you to write and then edit a story?
Matt:  Depends on the size of the story. The first draft of "The Devil's Fire" was completed over five years ago, and then I set it aside and moved onto other things. I came back to it early 2011 and started editing it. I changed the ending into something I was finally satisfied with. The ending had been plaguing me for a long time, and one day it hit me.
I am currently finishing the sequel, "The Devil's Tide," which should be available this summer. With the main character, setting, and rules already established, it has been a much smoother process than the first book. The ending of "The Devil's Fire" provided a jumping-off point, and as cliché as it sounds, the second book has written itself. It feels as though the first book was merely a setup for this one.
Reader’s Haven:  Do you have to be alone to write?
Matt:  Yes. I need absolute silence and solitude. Any little thing will throw me off. I've yelled at my cat for jumping in my lap at the wrong time.
Reader’s Haven:  How do you go about naming characters?
Matt:  For a period piece like "The Devil's Fire," I generally research names that were popular at the time and find one I think best suits a character's personality.
Reader’s Haven:  Is it easier to write about the characters if you find pictures of them before you write or do you write then find character pictures?
Matt:  I always have an idea of a character's appearance in my head before I start typing. Katherine Lindsay's wild red hair in "The Devil's Fire" is her most important trait, foreshadowing the strong-willed and dangerous person she will become. Someone once asked me if the title was a reference to her hair, and I'd have to say yes.
Reader’s Haven:  How do you pick locations for your stories?
Matt:  For "The Devil's Fire" I chose one of the most exciting pirate ports at the time in which the story takes place, which was Nassau. So much happened there and I had a lot of fun researching it. It just seemed the natural place to set a pirate story, especially since real historical figures enter into the novel at key points. Nassau provided a perfect entry point for merging fiction with history.
Reader’s Haven:  Do you specialize in one genre?
Matt:  Not at all. I'm in the early stages of a young adult series called "ARCTURUS," which is a blend of science-fiction and fantasy. I'm a huge sci-fi/fantasy nut. I'm also finishing up a horror/western novella. I believe characters are the most important factor in any genre, so no matter what the setting is, I never want the story to overwhelm the characters.

Katherine Lindsay, a timid young woman from London, must contend with an ambitious pirate captain who has murdered her husband and taken her hostage aboard his fearsome ship, Harbinger. As Lindsay grows accustomed to life among pirates, she finds it increasingly difficult to resist her attraction to their wayward lifestyle and the thrill of high-seas adventure. But the memory of her dead husband weighs heavily on her conscience, and her swelling guilt may prove to be the ultimate undoing of her kidnappers. Pirate lovers will find no shortage of treachery, cutlass duels, ship-to-ship battles, buried treasure and much more.

Excerpt from "The Devil's Fire":

It was six hours before the pirates discovered her cowering beneath the bed.

Several pirates spilled into the cabin, laughing and cursing. She glimpsed only their feet. Some wore boots, but most were barefoot. She watched through a hole in the heavy quilt that was draped over the bed as they thieved most of her clothes and jewelry. They took whatever perked their interest and then left, their boisterous laughter fading into the roaring pandemonium that had enveloped the main deck.

After what she presumed to be two hours, she heard a loud scuttle and a subsequent shriek that was abruptly cut short. A riotous commotion lasted for nearly five minutes before it broke into uncontrollable fits of laughter. For the next hour she was left to ponder her husband’s fate. Her mind played out a relentless torrent of ghastly possibilities, with Thomas meeting a grisly death in every one of them.

And then, with a glorious flood of relief, she heard his voice. Her eyes burned. She squeezed them shut, refusing to allow any tears to burst free; there would be time enough for that later, when she held him in her arms again, and the present ordeal was nothing more than a memory.

Thomas was conversing with a man whose voice held a distinctive air of authority. As this man spoke, the pirates gradually calmed. Katherine found herself transfixed on the voice, even though it was far too muffled through the cabin walls for her to distinguish words. He possessed a tranquil tone that she rather liked, and she temporarily forgot her peril while listening to him.

Thomas and the man with the fair voice eventually ended their conversation, and the pirate uproar started anew. This went on at some length, and the cabin remained empty over the next few hours. Gradually, the clamor outside grew even louder, and the unmistakable sound of a shattering bottle prompted her to wonder if the pirates had discovered the cases of wine in the cargo hold.

The endless ruckus numbed her senses, and she found her eyelids growing heavy. The floor’s wooden planking seemed to stretch away from her. Her vision thinned to narrowing slits that soon receded into darkness.

The door was thrust open, and the ruckus outside flooded the cabin like a tidal wave. Katherine lifted her head and smashed the crown of her skull against the underbelly of the bed. Her eyes shot open in accordance with the jolting pain.

A pair of buckled shoes marched deliberately for the bed. The man who wore them reached down and tore the quilt away, spoiling her hiding place. With the velocity of a striking snake, his hand shot under the bed to grasp Katherine’s hair, dragging her painfully from cover.

“This ship’s treasures never cease,” said the man with the voice that she had liked so much. But his pleasant enunciation was no match for the hunger in his eyes.

CONTEST:  One lucky commenter will win an e-book copy of Devil's Fire - be sure to leave your email addy in the comment so we can contact the winner on Sunday, April 1st. Good luck!

Thank you all for stopping in to read whether or not you left a comment. We appreciate it. Be sure to visit Matt's sites and connect with him online!

Authors, we'd love to have you as our guest. Readers love to find out about new books and new authors. Click the button above to send us a note and let us know when you'd like to be here. Chat at you soon!

by Deanna Jewel on Amazon